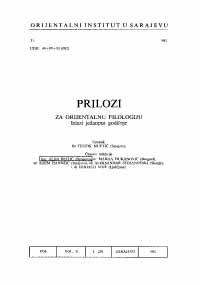 Summary/Abstract: The myth and the cult of walis (in Arabic: wall, pl.: awliya) as Moslem saints, widely spread during the Ottoman Empire, were felt on the territory of the present-day Yugoslavia, too, and similarly in Bosnia and Herzegovina. Their effects are still noticeable here in the tradition' and the folklore as a separate Oriental component of folk culture. The document I am publishing here in the translation from Turkish is a contribution to the study of that subject matter. The title itself is fairly explicit as regards the subject the document treats : Some turbehs and sacral graves, cited by name, of honorable sheikhs, reverend founders as well as famous ulema and good people, buried in the town of Sarajevo, who are considered to be walis and whose graves are places of pilgrimage visited by people for murad. Altogether 74 graves as cult places and more than 80 walis. The following descriptions are special characteristisc of the list: the detailed location on the territory of the town of the graves and the cult places respectively, the type of the tomb monument (turbeh or just tombstones in the forms of columns »nishani«), somewhere even the shape of the stone columns respresenting the monument, and a' particular folklore detail: an indication that on the stone tombcolumns there is a hole deepened in the form of a coffee cup (finca-n) - made on purpose, to enable pilgrims to scoop rainwater with spoon and drink it, which was believed to soothe labour pains, prevent diseases etc. The most walis named on the list were historical personalities. There were three women among them. It sould be also mentioned that the walis whose graves are listed here were mostly from the order of Sufis in general (42 cult places), which is completely in conformity with the conception that it were the Sufis who propagated the myth and the cult of walis and who themselves were mostly declared to be walis.