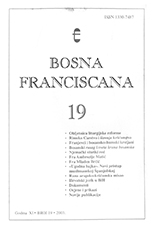 Summary/Abstract: This article explores some of the factors which enabled Christianity become a world religion in a relatively brief span of time. As well as looking at the culture of the time, it examines the contribution of military, legal, monetary and communication factors in the Roman Empire. These factors were a cohesive force which made a vast empire, of many ethnic groups (nations), cultures and religions, into a unified social-political and economic-cultural space. All these factors bear marks of the Roman Empire and Greco-Roman civilization, and therefore they may be treated under the heading "globalization" of the Roman Empire. In their oral and written address to their audiences and in their mutual correspondence, the first proclaimers of the Good News made extensive use of the advantages of these "globalizing" factors on their missionary journeys. However, the crucial and the most important driving force behind the rapid spread of Christianity was the self-awareness of the first Christian proclaimers of their universal mission, their finn belief in the saving power of the Gospel and their conviction that all peoples are in an urgent need of God's salvation.