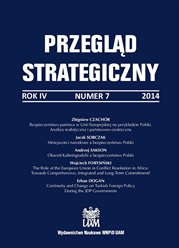 Summary/Abstract: Seeking the universal definition of the security of Poland in the unstable system of the European Union is based mainly on finding a role player and the actor who as an independent entity is actively involved in the EU system of multi-dimensional negotiations and tenders (brokering between different interests). Poland must be prepared for its program of strategic and tactical activities in the EU, including the state-centric horizontal and sectoral priorities, both the crisis and the antagonistic and dysfunctional. This requires perfect preparation educated team of people dealing with security. Poland must possess the ability to adapt to the surrounding world (Europe) by broadening the base of the system of integration: directly related to the adjustment to permanent changes in the European Union and the global environment. The adaptation is also important from the point of view of the need to stabilize the system. It allows to neutralize any attempt to functional disturbances of its structure, position and set of competencies. Adaptation should complement innovation and missionary Polish visible through the introduction into the environment (ambient) new rules and security mechanisms. Innovation involves the initiation of a new style/way of thinking about own security, and therefore with innovation in the field of the multi-level recognition of security. In so understood security of the state consists of not only the ability of defense (military), but also the strength of the economy and resources, which Poland should have. Missionary boils down while to promote and publicize the values assigned to the nation-state - is not recorded in the EU treaties such as power, raison d'état and independence.