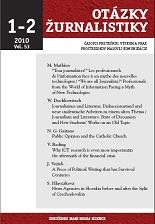 Summary/Abstract: Until 1989, news agencies of European socialist countries worked together on principles of non-commercial news exchange and mutual assistance. After the fall of the Berlin Wall at the end of 1990, the Conference on Security and Cooperation in Europe (CSCE) took place in Paris. Representatives of NATO and the Warsaw Pact acknowledged historical facts and accepted a programme document on the building of a united Europe: the Charter for a New Europe, based on respect for human rights, pluralist democracy and market economy. Freedom of expression and the right to information were underlined as key human rights. This provision changed the mass media sphere in the whole region of Eastern and Central Europe. In countries free of censorship and Communist obedience, desire grew for independent and objective information, which brought to life alternative sources of information. At the beginning of the 90s, several independent news agencies were created. On 31 December 1992, Czechoslovakia, established in 1918, disappeared from the world map. Two new states were simultaneously and peacefully established: the Czech Republic and the Slovak Republic. Social motions were reflected in the fate of the official Czechoslovak news agency ČTK/ČSTK. Represen-tatives of ČSTK in Slovakia realised their historic opportunity to modify their position in the asymmetrical structure of the mutual state agency. The end of Czechoslovak mass media, including ČTK/ČSTK, was marked by the Federal Assembly in 1992 by adopting the Act. No. 597/1992 on the Annulment of the Czecho-Slovak Radio, Czecho-Slovak Television and Czecho-Slovak Press Bureau. The News Agency of the Slovak Republic (TASR) was founded.