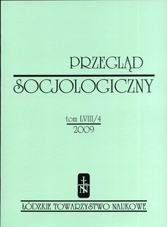 Summary/Abstract: The times of the so-called ‘real socialism’ abounded with apparent actions. It would seem that such post-1989 changes as political democratization, market facilitation of the economy and introduction of the principle of publicity into the public sphere should have yielded a gradual marginalization of apparent actions. Instead, there are still plenty of apparent actions in Polish social life, even if their sources, mechanisms and functions have partly changed. The article addresses the two areas where apparent actions are particularly intense. In the fields of Science and Higher Education, a number of detrimental, and usually taboo, fictions have cumulated, especially in the domain of research, publications and mass education. The sphere of mass media, journalism, public debates and shaping of public opinion contains equally destructive illusions. Recent tendencies in apparent actions urge a theoretical reflection on apparent communication and apparent knowledge, and help to isolate ‘neo-apparent’ actions.