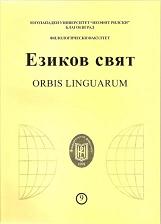 Summary/Abstract: Konstantin Mutafov is one of the forgotten Bulgarian intellectuals, whose literature and social activities flourished in the beginning of XX century, before the totalitarian period. He is very active in dramaturgy, critics, translations, theatre directing, editing of political and literature magazines. His works were distinguished with awards from the Ministry of Education and the Union of Bulgarian Writers. In 1920 and in 1943 he received medals for civil service from King Boris III. In the author's archive there are two honorary diplomas, dated 1940 from the Italian King Victor Emanuil III and from the Italian Minister of Foreign Affairs for his contribution to Bulgarian Italian cultural relations.