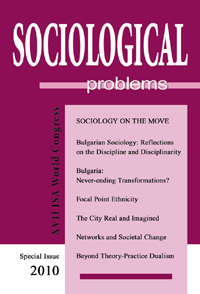 Summary/Abstract: The subject of this analysis is the relationship between religious identity and the value orientations registered in the survey. Hence, of chief importance is the hypothesis that affiliation to Islam and Muslim identity form a different and distinct value profile. The obtained survey results and comparisons with results of prior surveys provide grounds for formulating the hypothesis that in the past ten years the importance of religion as a whole has changed in Bulgarian society. The conclusion is that the predominant secular values have expanded their influence among the Christian group of respondents, while among Muslims in Bulgaria there is an on-going process of consolidation around Islam as a core of values. The data show that, among those who have indicated religion, work and the family as very important in their lives, there is a greater proportion of respondents who define themselves as Muslims. It is around these three spheres that are concentrated the most distinct groups of value orientations, for which we can claim with a high degree of probability that they are shared by Muslims in Bulgaria. Religious affiliation is becoming a factor of the entire social, civic, and political conduct of Muslims. For a significant part of respondents who self-identified as Muslims in this survey, religion is no longer something separate, but a complete environment that determines the attitude to all other values and attitudes. The leading importance of religion as a value determines the various degree of importance of other topics, such as leisure time, relations with friends, and the striving for individualized social self-expression.