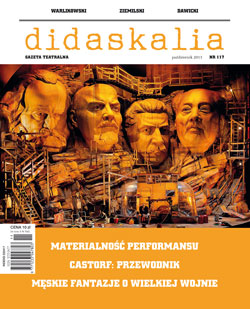 Summary/Abstract: A text devoted to queer (fe)male artist Mx Justin Vivian Bond, who became one of the characters that inspired Warsaw Cabaret. The author describes Bond's life by evoking his/her autobiography, in which the complicated identity processes arising from living “between” genders are explained. Stępniak describes Mx Bond's various fields of activity as follows: in his view, the utopia constructed by Bond, which is supposed to become a place of absolute liberation from the norms of a binary world divided into clearly defined genders, is close to Warlikowski's output at times when he is not only trying to explore the phenomenon of “the freak”, but also creating a vision of a “new, better world”.