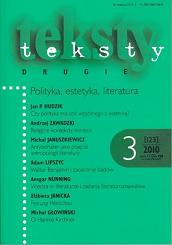 Summary/Abstract: Walter Benjamin’s Brechtian writings – i.e. those devoted to Brecht and the ones written under his influence – form an embarrassing part of Benjamin’s oeuvre. Gershom Scholem and Theodor Adorno considered them to be largely the result of Benjamin’s intellectual and political confusion. Although this diagnosis is right in many ways, these writings form an integral part of this work; they embody a certain extreme variation on the themes Benjamin was preoccupied with. I suggest an analysis of the most relevant dimensions of these writings, focusing on the notions of trace, citation, barbarity and commonness. I pay special attention to the way in which these most secular of Benjamin’s writings relate to his messianism, endeavouring to show this secularity as a paradoxical consequence of certain aspects of messianic theology.