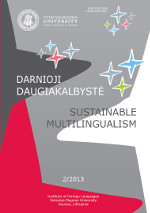 Summary/Abstract: This research paper sets out to present linguistic aspect of ideological framework in making both Serbian national identity and national state building program created in the first half of 19th century by two different Serbian writers (Vuk Stefanović-Karadžić and Ilija Garašanin). In the following decades this “linguistic” framework of national identity became one of the cornerstones of Serbian national ideology and foreign policy. The question of national identity and creation of national state occupied the first place of agenda in the mind of the leading Serbian intellectuals and politicians in the first half of 19th century. Imbued by ideas of German Romanticism and French Revolution, Serbian patriotic public actors set up a goal to create an ideologicalpolitical framework for Serbian national liberation under foreign occupation – Roman Catholic Habsburg Monarchy and Islamic Ottoman Empire. The present work investigates the linguistic model of national identification of the South Slavs designed by Vuk Stefanović Karadžić in 1836 and the programme for the restructuring of the political map of the Balkan Peninsula drafted by Ilija Garašanin in 1844. This work is an attempt to reconstruct the understanding of Karadžić and Garašanin of those components of group consciousness which could affect the sense of belonging to the same community. There are three goals of this research paper: to investigate how language influenced Serbian national ideologies in the first half of the 19th century; to discuss how Vuk Stefanović Karadžić, the most influential Serbian 19th century philologist, and Ilija Garašanin, the most important Serbian 19th century politician, answer the fundamental question of Serbian nationalism from the perspective of the 19th century Romanticism: who are the Serbs and what are the borders of the united Serbian national state?; and to define the formation of structure of Serbian linguistic nationalism in the first half of the 19th century. Two research methods were applied were: the method of the text analysis of the prime historical sources and the method of comparison of different interpretations and understandings of the works by V. S. Karadžić and I. Garašanin. The main research results are that V. S. Karadžić’s understanding of the language in the conception of Serbian linguistic nationalism was primarily of ethnic nature and that I. Garašanin drafted a project of the united Serbian national state by implementing a linguistic model of Serb national identification developed by V. S. Karadžić.