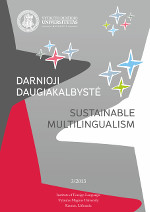 Summary/Abstract: The study examines the fate of the Serbo-Croatian or Croat-Serbian language after the dissolution of the former common state of South Slavs, excluding Bulgarians, in 1991 with the main emphasis on the phenomenon of inauguration and promotion of the Bosnian language, which is one of the youngest Slavic and European languages today. The aim of this study is to present the development of the successor languages of the Serbo-Croatian or Croat-Serbian language with the main focus on Bosnian which was officially inaugurated in 1996 and up to now is spoken by the Muslim South Slavs in Bosnia-Herzegovina and Sandžak region divided between Serbia and Montenegro. However, the speakers of the Bosnian language identify themselves as the Bosniaks, but not as the Bosnians in the ethno-national sense. The specificity of the Bosnian-Herzegovinian ethno-linguistic situation in the last two decades is marked by the fact that in this republic officially three ethnic languages (Bosnian, Serbian, Croatian) are spoken although supporters of the Bosnian language try to prove that the mother tongue of all inhabitants of Bosnia-Herzegovina and Sandžak (Raška) region is only Bosnian. The specific position of the Bosnian language among all Slavic languages is visible through the fact that its name is different from the name of the state (Bosnia-Herzegovina) in which it is spoken as well as from the name of the nation who speaks it (Bosniaks). From the linguistic point of view, after the dissolution of the Socialist Yugoslavia, the Croatian, Bosnian, Montenegrin and Serbian languages continue to use one linguistic system, but from the sociolinguistic point, we can speak about four internationally recognized independent languages. It is a matter of “linguistic engineering” to create more factual differences in syntax, vocabulary, orthography and grammar among the four only de jure separated languages in order that they become de facto different languages. The three languages (Bosnian, Serbian, Croatian), emerging on the grounds of the ex-Serbo-Croatian or Croat-Serbian language in Bosnia-Herzegovina, are standardized on the basis of the ijekavian dialect which is a common component that still connects them into a single linguistic system. However, it is expected that in the future the technology of “linguistic engineering” will focus on the creation of “ethnic” differences within this common dialect. In this short analysis of the sociolinguistic aspect of the dissolution of the former Yugoslavia, with the emphasis on the inauguration of the Bosnian language, a comparative method and the method of text analysis are used as a form of sociolinguistic penetration into the role and function of the language in the creation of national identity and in setting nation-state boundaries. In addition, we used a method of the mutual complement of the data from sources and literature.