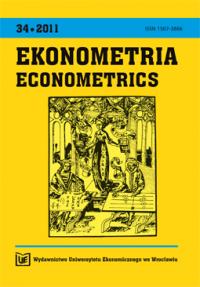 Summary/Abstract: This paper presents the results of testing the causal interdependence between the number of patents, R&D outlays and GDP in Poland on the basis of quarterly data for the period Q1 2000-Q4 2009. We found the significant evidence of causality running from technological progress to GDP in Poland. In addition, we found that the number of patents is a causal factor for employment and that employment Granger causes R&D outlays. These findings indicate causality from patents to R&D expenditure, which was also detected by the analysis of a separate (two-dimensional) model. Although R&D outlays in Poland are still insufficient, our study indicates a significant contribution of technological progress to economic growth. One may claim that Polish government and private firms should invest more in R&D sector.