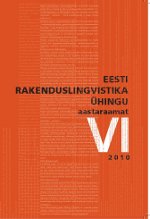 Summary/Abstract: This paper examines linguistic politeness among Estonians and Russians in Estonia. We raise the question of how groups living in different conditions of societal bilingualism acknowledge different politeness norms and hence exhibit different politeness behavior. Our study focuses especially on the choice of the formal or informal second person pronoun (the T/V phenomenon), but we also investigate other aspects of interaction (such as respondents’ metalinguistic awareness of forms of address and reference to an absent third person). The analysis is based on university students’ responses to a sociolinguistic questionnaire. Data from native Russian speakers in St. Petersburg are used for comparison with data from Russian speakers in Estonia. On the basis of the findings from this study, we conclude that the communicative culture of Russians and Estonians is not greatly different, although certain particularities exist which differentiate them. Both Russians and Estonians use the formal V pronoun when addressing strangers older than themselves. The most notable difference in making the choice between forms of address is that Russians choose the formal V form primarily on the basis of age difference, addressing even close acquaintances with V if they are older. This behavior is explained by the speakers with the concept of uvaženie, or “respect”. For Estonians, age differences are less significant than familiarity, and close acquaintances or relatives are usually addressed with T, even if they are much older. There is no clear, unified stereotypical explanation among the Estonian respondents of why one should use V with anyone (for instance, a lecturer). Explanations tend to appeal to the context of discourse (e.g. it is habitual to use V in the context of academic discussion). Because the norms for using V are clearer amongst Russian speakers, Russians seem to have fewer dilemmas than Estonians regarding which form to use.