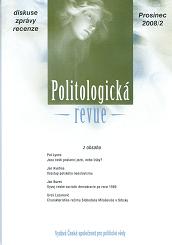 Summary/Abstract: The article analyzes the development of the Czech (Czechoslovak) Social Democratic Party (ČSSD) since the fall of communist regime in 1989 to 2008. It concentrates on the changes of party strategy and position inside the Czech party system, step-by-step process of internal development and formation of the party structures. The author deals with the transformation of the party strategy from “loyal” opposition toward strong oppositional party in 1993. He describes the main challenges connected with the problems when the party formed a minority cabinet (1998) and when the party formed a coalition with centre-right wing parties (2002-2006). He also stresses the problems with party leadership. This case study is also important because after 1989 Czech social democrats became the only party of this party family in Central Eastern Europe, that has not postcommunist origin and that had to compete with rather strong Communist Party on the left.