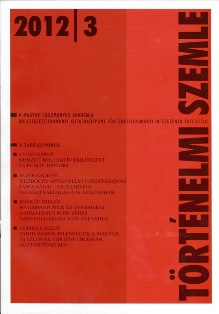 Summary/Abstract: The emergence of academic history writing in the 19th century soon pushed collective memory into the background and even discredited it. Today, however, we are witnessing processes which evolve in the opposite direction. The ever more conspicuous spread of collective memory is weakening the social acceptance of professional historiography. According to one of the conceptual responses to this development, historiography itself is but one method or manifestation of collective memory. Yet, despite the heated dispute of the problem, there can be no return to the previous state when academic history writing was able to monopolise the discourse on the past. An important obstacle to restoration is the mere fact that public history had in the meantime become a force liable to shape both public opinion and knowledge, which claims for itself the exclusive right of speaking about history. Public history is a complex and diffuse phenomenon, which mainly diverges from history writing in that it aims at fully meeting the ever changing expectations of the audience. One of the consequences is that public history can almost always be easily instrumentalised for manifestly political ends, and that it aims at rather entertaining than educating its public. Public history is thus an efficient means of identity politics, and at the same time an integral constituent of mass culture, which almost always provides public memory with emotional and intellectual impulses. History writing, collective memory and public history together constitute the intellectual and communicational field where the basic topoi of national memory are born, which would then serve as the durable basis of any memorialising practice. In Hungary two traumatic experiences have functioned as the starting points of real and potential places of national memory (P. Nora): one of them is the memory which manifests itself in the Trianon syndrome, and is attached to the territorial losses of the country after World War I, whereas the other is a different past with the Holocaust committed during World War II in the focus. These are competing traumatic historical narratives, yet the Trianon syndrome monopolises and reserves for itself the national claim for the traumatic past in its function of sustaining identity. The basis of reference for it is the concept of the nation as an exclusive sacrificial community, which involves the conceptual relativisation, and sometimes the outright negation, of the Jewish sacrificial community. A key role in this process is played by the instrumentalisation of the historical past, which is an integral part of the intellectual machinery of the political right. It is assisted by an ever growing number of organs of public history and the equally increasing number of manifestations of this particular view of history. The mutual absolutising of the victim trauma, as well the absence of recognising and admitting the perpetrator trauma necessarily