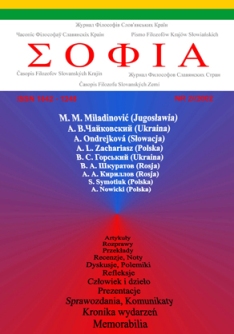 Summary/Abstract: In ten brief reflections the article deals with intolerance and reversible phenomena connected with attempts at advocating tolerance within both micro and macro-social frameworks. Attention is paid to exposing the destructive potential which cumulates in advocating various forms of the regulative idea of tolerance. After an excursus in history the author brings a thesis that a certain degree of tolerance is usually enforced by finding out that neither party can achieve the absolute victory. Tolerance is then described in the fin l consequence as a weak principle of demobilising nature, a repressive principle, and an idea with a very explosive potential whose percussion primer, mechanism and sublimation is hatred.