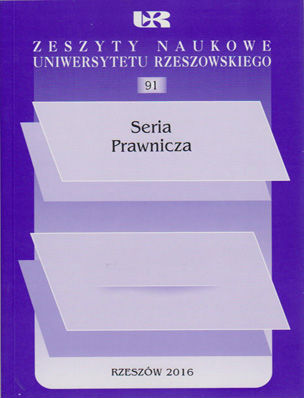 Summary/Abstract: The Senator’s oath of office is a solemn declaration taken in the presence of the Senate at the hands of Senior Marshal by which a newly elected senator swears to perform his duties to the Nation diligently and conscientiously, to safeguard the sovereignty and interests of the State, to do all within his power for the prosperity of the Homeland and the well-being of its citizens, and to observe the Constitution and other laws of the Republic of Poland. The given institution dates back to the times of the Noble Republic of Poland, when it was called from the Latin “iuramentum”. The oath was also taken by Senators in Second Polish Republic. In the People's Republic of Poland parliament until 1989 was unicameral consisting only of the Sejm. As of the end of the Polish People’s Republic senators again are swearing in before the commencement of the performance of the mandate. The senator’s oath of office is a specific kind of legal institution whose final character is the result of relations between different normative systems, namely law, morality, religion and custom. Taking the oath is the Senator’s legal duty. Breach of this obligation results in the loss of the mandate. Whereas the fulfillment of it means that from now on Senator shall have full rights and duties of a parliamentarian. The capability of taking the oath with additional sentence “So help me God” gives the title institution religious dimension. However, in contrast to the time of the First Polish Republic, when the oath was taken on the crucifix, now the form and content of the oath are secular. Currently, the optionality of Invocatio Dei is the guarantee of preserving idividual freedom of conscience and religion and the separation of church and state principle. Through its text the oath of office operates as a quasi-code of ethics which is the source of primary deontological requirements addressed to Senators. Finally, the swearing-in ceremony reflects at the same time the influence of tradition and role of the protocol custom.