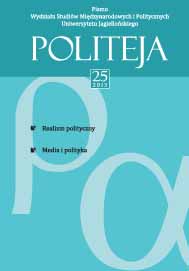 Summary/Abstract: The author’s focus in this article is an analysis of institutional censorship arising from legally binding decrees such as 1944 and 1946 with their amendments. The article consists of two main sections: The first section outlines the bases of the topic and its genesis, The second section describes the development of censorship during the Communist period. The analysis comes to the following conclusions: Institutional‑wide censorship consists in the perception of the system where both people and institutions formally and informally cooperate thus in effect removing the authorities from the legal system. In essence the authorities restrict freedom of speech thus making the manner and scope of the act contrary to the Rule of Law. Since the establishment of Communism, the government announced various acts of censorship in the mass media. However these acts were at best, vague. The Legislature has delegated authority in the form of collective or single institutions and is governed by acts of non‑enforceable rules of law such as statutes.