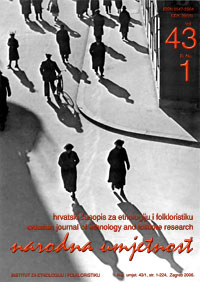 Summary/Abstract: Contextualising Austrian sources dating from 1867 until the end of World War I, this paper gives a critical overview of historical texts about the culture of Istria. By the mid-19th century and towards its end, ethnology, the so-called Volkskunde started to be promoted and emphasised by the very leadership of the Austro-Hungarian Monarchy as important in the definition and production of State culture, and was then implemented on the level of ethnographic collection, both objects and in the form of writings about traditional life. Such an approach to ethnology in Austria was embodied in the personage of the Crown Prince himself and implemented by Michael Haberlandt, founder of the Vienna Ethnographic Museum. However, this view of Istria was preceded by the work of the statistician, Karl Freiherr von Czoernig, published as early as the mid-19th century. It is asserted that these three writers created basic stereotypical constructs which became the formal framework for all evaluation of Istrian culture.