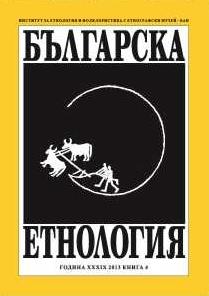 Summary/Abstract: The main subject of the research is the way in which the state institutions and government policy became important agents of the changes occurring in the traditional kinship model. The analysis is focused on the rites of mass baptism in the public institutions for children deprived of parental care, carried out in the 1990s in Bulgaria. The article juxtaposes the tradition by which the position of godfather is institutionalized by religion and became an important part of the Bulgarian kinship system, with the changed nature of these rites nowadays, as demonstrated in the case of mass baptism. People who are involved in spiritual kinship relationships, according to religious dogma and canon law, are subject to endogamy and exogamy rules. The rites of mass baptism, observed in 1996 during fieldwork in the Center for children deprived of parental care “St. Nikolay Mirlikiiski” in Blagoevgrad, did not create kinship ties between the participants in the ceremony. The relations of sponsorships were given priority and it was the main reason for terminating the practices of mass baptism after 2000, as the survey carried out in July 2013 indicated. In the context of changes in the traditional kinship model, the article puts forward the question of engaged anthropology.