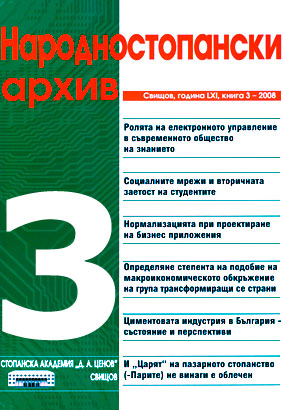 Summary/Abstract: The bank transfers from emigrants are an external financial flow for the economy of our country. This specificity is related to its coverage and reporting in the System of National Accounts (SNA). The transfers of funds from emigrants are part of the factor income and current transfers, specified as incoming financial flows for our country. The system of national accounts and the balance of payments are based on the same methodology of acounting. Information about the emigrants’ bank transfers is contained in the current account of the balance of payments (CAB). It is obtained as a result of the trade balance and the external financial flows (net factor income and net current transfers). Inflows of the emigrants’ official transfers are included in the credit side of the factor income and current transfers with a positive sign. An algorithm is proposed to move from annual to quarterly (monthly) data for the bank transfers by emigrants by calculating the coefficient ?. It represents the part of the emigrant’s money from current transfers. The presence of a reverse dependence between the distance from Bulgaria to other countries and the number of Bulgarian emigrants in them is proved, based on the links of the gravity model; the dependence between GDP in the country which is a source of the emigrants’ bank transfers and the value of amounts sent by the emigrants is analyzed. The presence of a strong positive correlation between them is proved.