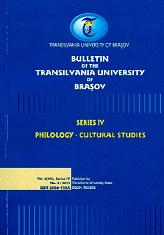 Summary/Abstract: One of the many fascinating aspects of James Morier’s novels is his way of depicting ethnic differences in a humorous way. His 1834 novel Ayesha illustrates an intercultural romantic relationship between a Christian English lord and a Muslim Turkish maiden, in which the author satirizes the stereotypes attributed by Christians to Turkish Muslims and vice-versa, also offering the reader an insight into late 18th century multiculturalism in Turkey. The aim of the present paper is to explore the ways in which James Morier organizes the humorous narrative fragments in order to elicit laughter and the extent to which the current theories of humour can be applied to these particular fragments, in an attempt to understand the cultural pluralism as well as the feelings and concerns of particular groups of people living in the Middle East at the turn of the 18th century.