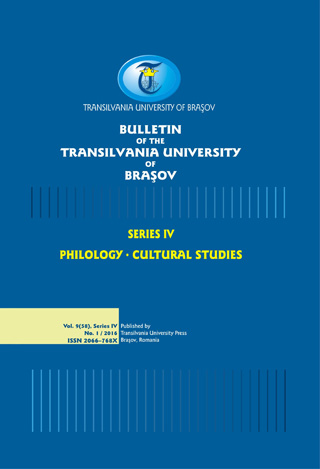 Summary/Abstract: This paper studies the patterns of communication among the ethnic groups living in the Transylvanian rural district of Caţa, aiming at identifying the people’s willingness to communicate and the non-conflictual nature of the dialogue in this rural area. The framework employed in the analysis is Dell Hymes’s (1974) interactional S-P-E-A-K-I-N-G schema. The study is based on data collected by the first author during two periods (August – September, 2012 and January, 2013), using two instruments: the direct, participant observation and the interview. The participants are representatives of four ethnic groups, namely Romanians, Hungarians, Germans and Roma people. The findings of the analysis show that the inter-ethnic communication in Caţa is non-conflictual and non-exclusive due to the people’s openness to adapt to the others and that the limitations of the intercultural dialogue are rather suggested by the administrative authorities and the national ethnic organizations.