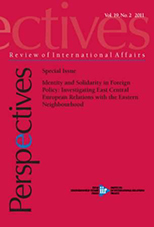 Summary/Abstract: This article examines the significance of historical and political identity for the Polish policy towards the eastern neighbourhood. The historical legacy of the Polish First Republic – the Commonwealth – includes Poland’s feeling of affinity with the lands and peoples that once constituted that state (Belarus, Lithuania and Ukraine) as well as its belief in a Polish ‘mission in the East’ as a transmission belt of Western values. It is argued that Polish decision- makers, in Poland’s policy towards the eastern neighbourhood, acted in accordance with that historical legacy and consistently privileged the so-called romantic approach, which is focused on promoting democracy and market economy in the eastern neighbourhood and advocating the strengthening of contacts of the EU and NATO with those countries. The dominance of that approach over so-called minimalism, constituting a break with certain elements of the historical legacy, can be seen as an illustration of the considerable impact of historical and political identity on the process of the definition of interests. The analysis of the discourse of Polish decision-makers suggests that the feeling of solidarity, stemming from common historical experience (the legacy of the Commonwealth and the struggle against communism), has been an important factor behind the Polish efforts to draw the eastern neighbours into the European and Transatlantic structures.