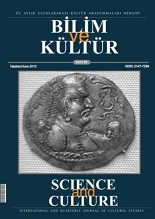 Summary/Abstract: While coffee is among the most consumed beverage in the World, Turkish community has not consumed it only as a beverage item, it has created a tradition at the same time. Although coffee plants have come from the territory of Yemen to Anatolia, it has referred to as "Turkish coffee" in Anatolia. Coffee drunk everyday at certain hours by Turkish people, causing the presence of the places named Coffee Houses witnessing friendly chats where oral Turkish Culture still lives and sometimes forbidden by religion as it is likened to wine, and sometimes forbidden as it is counted inconvenient for the government, the honorable accompaniment of some rituals, coffee allthough taken from another region and culture has become an indispensable part of the Turkish culture. In this notification; the place of the coffee in Turkish Culture; coffee equipments, the preparation and presentation, and the importance of coffee in the applications like traditional meetings, fortune telling and, will be evaluated in the social and cultural structure constituted around Coffee Houses.