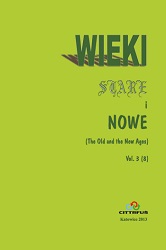 Summary/Abstract: The authors attempted to discuss the activity of Administrative Commissions of Bielsko and Cieszyn seen in the context of Polish-German relations in Cieszyn Silesia in the interwar period. A presentation of the main problem area is preceded by a synthetic analysis of the origins of the self‑government in the very area in the context of the changes happening in Habsburg’s dynasty in the second half of the 19th century. As a result of the events taking place between 1918—1920 the German ethnic element lost the possibility of creating an independent national centre in the territory of Cieszyn Silesia, however, it still created an economic lobby. Taking over a political control in the part of its area by the Polish side, on the other hand, forced the necessity to enter its representatives to the self‑government structures so far dominated by Germans. In such a case, it evoked natural pressures and the necessity of ethnic regulations, which also constitutes the subject of the authors’ deliberations.