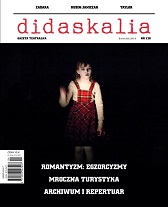 Summary/Abstract: An article by Agnieszka Dauksza and Szymon Maliborski, creators of the Krakow Dreams of Amon Goeth project that took place in the framework of the Artboom Festival in Krakow in 2013. The analysis of this undertaking as an affective event is their point of departure to consider the phrase "troubles with the Holocaust" and the issue of "dark tourism." The artists speak of their experiences tied to work on the project in the villa once inhabited by Amon Goeth, commander of the concentration camp in Płaszów. Due to the unofficial function of the house, it avoided being transformed into a "tame" memory site, though resulting in its repression, turning it into a fetish, and giving it the status of a "cursed" site. At the same time, it is situated in the context of Thanatourism;