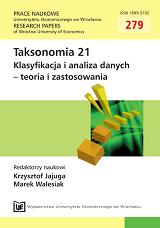 Summary/Abstract: The aim of the study is the construction of homogenous groups of employees in Poland (in 2009) due to received wages, taking into account selected characteristics. Investigation was provided to answer the question whether gender was a discriminate feature on the labor market in Poland. The research showed the presence of horizontal segregation, i.e. strongly female-dominated professions, such as education, health and social care. It was also proved that women were better educated and took part-time job more often than men. The analysis employing classification trees showed that gender was an essential discriminate feature and influenced wages.