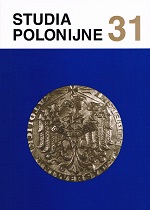 Summary/Abstract: This paper discusses various forms of activities and the mission of the Polish media linked with the Roman Catholic Church and the Polish National Church in the United States in the beginning of the twenty-first century. Its purpose is to diagnose various forms of activities undertaken by church institutions with regard to information provided to recipients, and to define the contents of of their mission/and function. The Poles and Polonia in the United States are recipients of parochial bulletins that make up the main form of communication within a parish. Furthermore some essential functions are fulfilled by the Internet, including Catholic radio and television broadcasting companies. The Catholic media fullfil the following functions in the Polish communities and Polonia in America: informative, cultural and educational, historical, evangelisational, political and ideolological, explanatory, integrative, and adaptive. Some of them play a special role in the globalising world. They strengthen the ethnic community, and also hep it to integrate itself with American society.