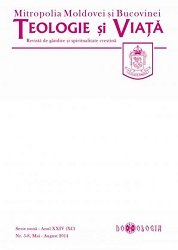 Summary/Abstract: During a time when the three Romanian Countries, Moldova, Ardealul and Tara Româneasca, where situated near the Austrian, Russian and Otoman Empire, suffering a political and religious tri-influence, the reign of the Romanian martyr ruler Constantin Brâncoveanu, will be placed under the sign of the religious cultural resistance and political diplomacy. Well aware of the religious unity of all Romanians, he will be a great warrior against the Romano-Catholic Union, being along side his fellow country man from Ardeal and specially with those from the Saint Nicholas Church from Scheii Brasovului, which he helped donating numerous religious books, preserving, the orthodox faith. From the Chronical writen by David Corbea, during a period of time, between 1683 and 1813, we find out that an important rol, from this books that were donated by Constantin Brâncoveanu, the important ones were the Holy Bible, The Gospels, the Triod, which were printed in different cultural centers in Tara Româneasca and Transylvania. Through this books, many written in Romanian, the Church could stop the anti-national religious character promoted by the Court of Wien. As a token of appreciation, the Romanians from Bra[ov, especially the ones living in Schei, will name a street in the honor of this great ruler.