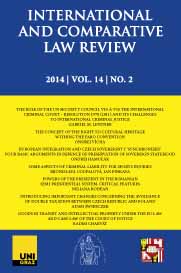 Summary/Abstract: European integration entity ceased to be just a forum for negotiations between independent and sovereign nation states. To some extent it overlaps with the states and becomes their competitor. In this context, the classical concept of state sovereignty loses its original content and meaning. The participation in the integration project opens the question whether it takes away or weakens sovereignty of Member States? This paper puts on four arguments to proof the hypothesis that Czech Republic continues to be a sovereign country even after accession to the European Union.