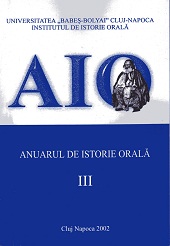 Summary/Abstract: When Communism' s instauration occurred not every Romanian was humbly prepared to simply accept it. More than that there were communities -living in the Romanian mountain areas - that set up some armed groups, activating against communism. Related to this, Huedin area had great importance because there activated three anticommunist groups: "Şuşman" group, "Capota-Dejeu" group, and "Cross and Sword" group. Being rather different as far as their setting up, organizing and activity processes are concemed, the three groups had a connecting element: their hope that someday the Romanian communist regime would be dissolved through the American intervention. This belief had determined the fighter's condition to be assumed as a grounded decision, representing the moral support that provided them strength to be able to survive in the mountains, under extremely hard weather conditions, for a decade. It also made possible to those that were arrested without ever being executed, to survive inside the communist prisons. Having this reality as a starting point, we tried to present through our study the expression shapes the "Americans' arrival" myth had generated at this level - which is the anticommunist resistance groups in Hudein -, the action strategies against the regime that were decided by deeply connecting them to the hypothesis of the USA military intervention in Romania. For this phenomenon to be better understood we also uncovered some of those elements that in our opinion had led to this ''Americans' arrival" myth: the Romanian emigration in the USA in the early 20th century, which generted especially in Transylvania an extremely positive image about the American civilization; the opposition press' campaign during 1945-1947 that had created the acknowledgement of the American interest towards Romania; the occidental radio broadcastings in Romanian (The Free Europe, The Voice of America) that sustained the belief that the Occident had been willing to intervene to suppress the communist regime in Bucharest etc. As main documentation source we used the oral testimonies given by those who had actually been members or by those who had collaborated with the anticommunist groµps. in Huedin, and survived communism. The Oral History Institute in Cluj-Napoca acquired these oral testimonies that were recorded on audiotapes during several research campaigns in Huedin area in the late '90s.