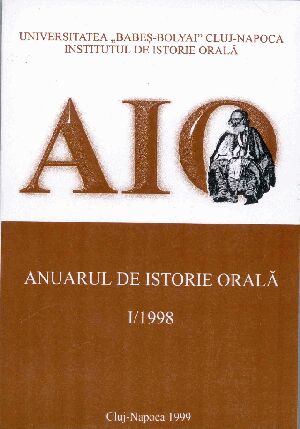 Summary/Abstract: By its immensity and amplitude the World War II generated nowadays a special interest for those who read historical literature and also for those who write historical literature. Untill 1989 because of the political pressure, historical books limited the presence of Romania during the war to the period between August 23, 1944 - May 9, 1945 when Romania was in the ally forces. Only after 1945 the researchers realised how important was the Romanian contribution against the ex-Soviet Union Army which, as a matter of fact, was a forbidden subject before 1989. Unfortunately, before 1989 and also after this year, the investigation about the presence of Romania during the war were a little bit stereotype. For instance, some researches were based on some ”classic“ facts as: war tactics, struggles, generals, finnancial aspects, diplomacy and so on. Also, the informational sources used were, most of them, written documents. Beyond all these, war ment a lot also for individuals; it changed destinies, was the starting point for life experiences. This study tries to reveal how war really changed lives, to bring to light some unknown aspects. According to these the author stood out feelings and attitudes of those involved in the war. The fact is that war has a huge impact upon mentalities and social psychology. This approach is based upon physical and mental compulsions suffered by the Romanian soldiers during World War II: fear of death, of being in prison etc. and also the manner in which they endured all these punishments. According to the facts, we tried to prove that life in the war managed to win despite of anything. To reconstruct the reality during the war we appealed to oral sources, which -- unfortunately -- are not wellknown both to historians and common people. Oral interviews is the main source our approach is based on and the intervievees are survivors in the World War II. About 11 veterans from Cluj county ( peasants, workers, intellectuals - from villages and towns accepted to reveal to the reader some of the cruel realities they lived during the war so that all of us could make an immage of what really war means.