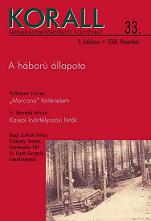 Summary/Abstract: Why was the irredentism so successful and supported by the wide circle of society? The reasons are probably the following: it was connected to a special occasion by touching the whole society itself, so the social experience and the meaning of cult were concurred. The palling of cult – among others – was related with the exchanging of the actual generation. The new generation wasn’t had the personal experience about the historical Hungary – that’s why the political leaders of the period tried to inoculate with revisionism irredentism the new generation through ceremonies of schools (which were the part of institutionalized educational system). My study based on manuals of ceremonies for teachers. I analyzed that how can manipulate ceremonies of schools the changing political aims between the two world wars. By the analyzed plays, scenes, dramas (for schools ceremonies) it can be told that the speeches and roles of these were all served the momentary aims of the actual political leadership. And they transmitted the actual countersigns, goals, attitude, and picture of enemy towards the children. The ceremonial speeches and roles reflecting steady tendencies. It follows that we can talk about a formally existed revisionistic moreover, irredentist in the level of sources cult by the political regime between the two world wars. That cult wasn’t ended by entering the Second World War but significally overshadowed and – parts of it – transformed. It helped the actual aims of the political regime: mobilization in war or rather the common effortment and trust of community for the winning of war.