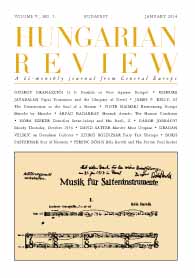 Summary/Abstract: Dr. Mária Schmidt, Director of the House of Terror, mediated a conversation with the journalist and filmmaker David Satter about his award winning documentary Age of Delirium, which tells the story of the fall of the Soviet Union as lived and experienced by the Soviet people. The discussion followed the first public screening in Hungary of Age of Delirium at the Pushkin cinema in Budapest under the auspices of the Danube Institute on 24 October 2013.