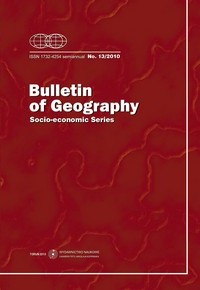 Summary/Abstract: The article presents the main changes in Bulgarian urban settlements during the last two decades and the present-day situation and processes of their development. A pronounced tendency towards a decrease in the urban population in Bulgaria can be observed in this period, which is closely related to the continuing drop in the total number of the country's population. A comparison with earlier periods shows that there is a greater concentration of population in the cities and middle-sized towns. The processes of transformation in Bulgarian urban settlements are similar to those in the other Central and East-European countries in transition. The economic transformations and the changes in the urban economy affected the urban territorial structure. The last two decades have witnessed considerable changes in the spatial pattern of the complex systems links established between the settlements as well as between the settlements, gravitating to the cities or agglomerations. The regional policy, which has been implemented for the past two decades, aims to consolidate the importance of Bulgarian urban settlements (over 20 thousand inhabitants) and agglomerations in regional development