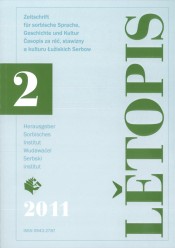 Summary/Abstract: The only work so far on the history of the Wendish Volksbank by Alfred Simon appeared almost 50 years ago. The author only concentrated however on the causes of its “collapse”. The achievements of the banking enterprise with its head¬quarters in Bautzen for the Sorbian population in general and the particular events at its most important branch in Cottbus were hardly mentioned. New findings on these matters have been assembled in this contribution. In addition, the attempt by the employees of the bank to restructure the “joint-stock company in liquation” as a cooperative is described. There is ho-wever need for further research to provide answers to particular political-economic questions, e.g. as to whether the plan, which was pursued for several years, failed because the Nazi authorities refused to give support to the Lausitzer Wirt-schaftsbank as the successor to the Volksbank.