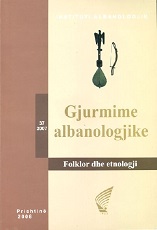 Summary/Abstract: In Albanian epicology significant steps were made since ’30ies of previous century, and the contribution of Eqrem Çabej is quite relevant. His views on oral epic have sent forward our studies in this field of oral literature. Long-standing of epic, its dynamic character and its study are issues of special interest, for what he gave a valuable contribution. Antiquity of Albanians and antiquity of their epic are connected. Epic life of Albanians and their epic songs cohabit. This cohabitation is old since Illyrian period. It brings data for Odysseus and says that we feel good for Albanian folk poetry can contribute in solving some Homeric problems. He speaks of pre ottoman Albanian ancient epic stratifications in Sicily and Calabria. Çabej talks of dynamic character of Albanian folk poetry as well as for poetry of other Ballkan populations, connected with unwritten tradition, thus possibilities for alterations are easier. With reason he insists that poetic production of a population should not be studied isolated. He praises Q. Haxhihasani ascertainment for three zones of this kind of singing in Northern Albania, on the river Drin and two expansion zones in-bet ween rivers Drin - Mat and Mat –Shkumbin. Çabej mentions Albanians, paralleled with ancient Greeks, ancient Germans, Celts, Armenians and Indians, that have a pair of Muj & Halil. Thus, it is not present in all Indo-European populations; it is not present among Slavic population and ascertains that everything ethnographic that is missing among Eastern and Western Slavs, and is present among Southern Slavs, it essentially deals with «suspects that comes out from previous sub stratification that they found in Western Ballkan regions, where they settled». Regarding some scholars’ opinion on Illyrian origin of the Homer Odysseus he says that we are pleased to note that Albanian folk poetry can contribute in solving some Homeric problems. Upholding general opinion that fairies were born late in Balkans and from Balkans arrived to Eastern Slavs and Western Slavs, Çabej reject hypotheses for existence of fairy among Southern Slavs and ascertains that she absorbed some features of Illyrian-Roman Diana, which were preserved till nowadays. Çabej claims that he noticed the categorical difference that makes versification between quantitative and numeric rhythm, in the field of folk literature loses a lot from its absolute value, since folk songs should be thought of by us as son that are sung. It can be considered very important that Çabej ascertains there is present ancient non-Greek Balkan ethnic stratum, thus Thrace-Illyrian, in the folklore of Balkan populations. Eqrem Çabej with this significant contribution in the field of folk epic studies should be considered among founders of Albanian epicology during ’30 of 20th century .