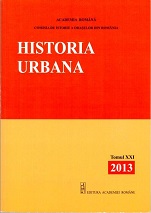 Summary/Abstract: This study is part of a larger research project about markets from Iaşi in modern era. Saint Spyridon Market was one of the most important markets of the city mainly in 19th century, but also in 20th century. The history of the market began earlier, in 1765, when boyar Gheorghe Beldiman bought the place. In this regard, we have identified the correct location of this place in urban context and we highlighted the importance of neighbourhood relations in the transfer of urban property. In the second decade of 19th century, the descendants of Gheorghe Beldiman have established a market on that place. With the help of various sources (documents, plans, illustrations), some of them unpublished, we researched the history of the market until 1864 and we were mainly interested in the following: the name of the market and legal status, identity and succession of market owners (Beldiman, Miclescu, Petrino), plan and market architecture, economic organization and trade specific, modernization projects (paving, restoration or construction of buildings, front straightening market), influence on other markets and the economic competition among them, neighborhood conflicts generated by economic interests (file Adolf Henig – Petrino family), involvement of central and local authorities in managing these conflicts and their role in the stimulating or braking the market modernization. The annexes have presented documents and plans relating to market structure and market rent, systematization and modernization, works of architecture and urbanism.