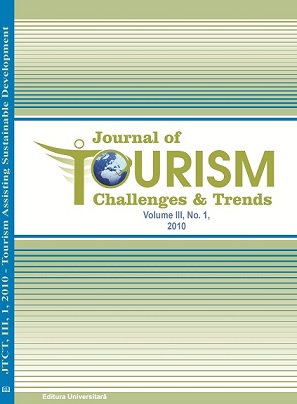 Summary/Abstract: The concept of sustainable development is rather new and still at a theoretical level in Romania. It has few or unfinished examples in practice, even though in other regions of the world the concept is put in practice and even outdated. From the very beginning we should question the whole idea of development, as sustainable development seems to be a model for evolution, yet it has also opponents and there are many that do not believe anymore in a restoration of environmental balances. Therefore, the present study aims to: analyze the birth and the evolution of the concept of “sustainable development”, with its major stages, from an evolutional point of view, as well as from the point of view of its significance and its applicability. Then, sustainable tourism is analyzed. It represents a more recent concept that becomes more and more of a guiding principle and a concrete approach for tourism, in general. This trend experienced and it is still experiencing a continuous ascending trajectory, yet if the “sustainability” feature is not fully taken upon, it can end up causing irreversible consequences. Then, the study deals with tourism in Romania, by considering and analyzing various types of tourism that are not, were, are, or could become sustainable. This last issue the paper deals with is of most interest as it only needs a conversion towards another type of development that involves three essential pillars: society, environment and economy.