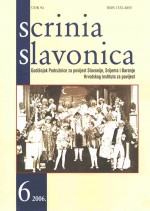 Summary/Abstract: The change of ownership relations, by various laws, has been conducted after World War Two in Croatia as well as in whole Yugoslavia and the aim of it was to socialize the private ownership in accordance to the communist program. That procedure particularly hit the Catholic Church, which was one of the bigger landowners, and confiscating their property was very thorough. Political relationship between the Catholic Church and the state influenced a lot to the procedure of confiscating the property from the Catholic Church in Yugoslavia, and that relationship was tensed. In those very unfavorable circumstances, there has been conducted an agriculture reform, confiscation, expropriation and nationalization of the property of Catholic Church. The Catholic Church was especially intensively hit by the agricultural reform. Farming land was one of the most important revenues for the Catholic Church. The thorough conduction of agricultural reform with Church property has brought the Catholic Church to very hard material position and the believers to the situation to take the burden of the existence of the Church to their shoulders in the severe post war time that they lived in. By the agricultural reform which was conducted from 1945 to 1948 more than 70 % of farming land owned by the Church was taken away. Aside from the farming land, the Church has lost significant assets in terms of buildings, agricultural stocks, cattle, agriculture machinery and tools. Since after the reform, the Catholic Church was imposed with several taxes, including those for the rest of the land; many parishes were forced to give the land to the farmers, cooperatives and different organizations to use because they were not able to pay the tax. Later they had problems with returning their land into their property. That part of the land that was not taken away from Catholic Church by the agricultural reform, has been taken later by confiscation and nationalization and most of all by expropriating. Besides the fact that the property of Church was definitely taken away, no smaller problem was the temporary taking of Church real estate by means of different laws on tenancy, decisions of National Committees, and by illegal military or police actions. For years there have been trials for relocating the illegal tenants from the buildings and flats owned by the Church that were inhabited against the will of Church. Nevertheless, the material weakening of the Catholic Church, forced it to contribute more to the spiritual actions and the bigger the pressure from the authorities was, the bigger influence and respect it had with the believers. But aside from strengthening in religious sense, the Catholic Church has, in time, recovered materialistically, what caused the concern of state authorities. The attempt of the communist authorities to disable the Catholic Church from acting by weakening their material position was based on the wrong assumption that