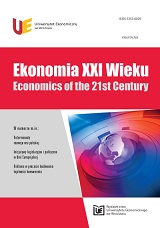 Summary/Abstract: Selected elements of research on factors affecting the level and quality of life of older people in Poland in comparison to other socio-economic groups are presented in the paper. The attention was focused on the level and diversification of pensioners’ household incomes. The author also referred to the structure and amount of expenditures on consumer goods. Greater flattening of incomes in the investigated group, which results, among others, from the roles taken by today’s seniors, was mentioned as well. The issue of poverty risk and the problem of subjective feeling of poverty were also discussed. It was noticed that the feeling concerning economic situation constituted the most important and the most democratic method of determination of the poor fraction. Therefore, the author referred to diverse questions, which aimed at the determination of the amount of people threatened by poverty and actually living in poverty. The questions that concerned the assessment of seniors’ own economic situation and satisfaction of needs as well as the ones which allowed to confront this situation with living conditions of other persons and social groups, were included in the survey. On this basis, it was noticed that the seniors’ assessments were less unambiguous and put them in position of people having average situation. Those questions were used to answer the problem and aim of research, namely if the seniors in Poland in fact lived on low level, both in objective and subjective dimension and, what influenced their poverty. On this basis, it was noticed that the situation of the investigated group was relatively better than the other professionally active groups. Paradoxes of income situation of pensioners’ households in Poland, which often are a source of livelihood or the situation improvement of entire families, particularly in agriculture and in rural areas, and not as they are commonly believed to be beneficiaries of the assistance only, were indicated. It was noticed that a favorable situation of seniors referred to persons who did not have health problems and did not need care. The unpublished data of the Central Statistical Office concerning budgets of households, which the author received in frames of the research project No UMO-2011/01/B/HS5/01034, financed by the National Science Centre, “Level of life of people with uncertain incomes in Poland” were used in the paper and constitute part of the project.