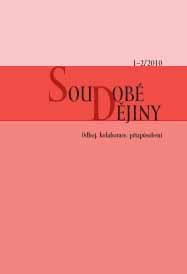 Summary/Abstract: In this review-essay the author looks at Michal Kopeček’s Hledání ztraceného smyslu revoluce: Zrod a počátky marxistického revizionismu ve střední Evropě 1953–1960 (Prague: Argo, 2009), whose title translates as ‘In Search of the Lost Meaning of the Revolution: The Birth and Beginnings of Marxist Revisionism in Central Europe’. The questions the reviewer raises and his development of the impulses contained in those questions help him to formulate broader reflections on the genesis, nature, and contexts of Marxist revisionism. In passing, he makes some mildly critical comments about the book. He also offers four different ways or lenses for reading Kopeček’s work. First he shows the possibility of perceiving it through the prism of the historical analysis of discourse, in which the main concern is the overall development of a certain type of thinking (here, Marxist), as is done in the history of ideas. From this perspective, the reviewer considers the relationship between Marxism and Nationalism in the twentieth century, not only in the sense of its legitimizing potential in pushing through Communist ideology and régimes in central Europe (as analyzed by Kopeček in this book), but also in the sense of the changes in Communist doctrine and the emancipating potential of nationalism at a distance from the ‘obligatory’ model of socialism and in the democratizing process of the 1960s. In connection with the development of Western Marxism, which is critical of ideological doctrine, the reviewer wonders whether each and every attempt to make doctrine a reality is not necessarily also its revision. And he asks to what extent the revisionist arguments of the 1950s were original or were, on the contrary, adopted from earlier revisionism. At the level of the analysis of hegemonic and critical discourse, that is, of Stalinism and revisionism, it is a matter of ideological differences and counter-positions in power-politics between the two camps. The author-reviewer here points to the different conceptions of ideology (stabilizing for orthodoxy, but mobilizing or, depending on the point of view, retarding for revisionism), and he points to the role of formal and informal institutions of power, and asks what it was that formed the common ideological ‘matrix’ of Stalinism and revisionism. The prism of analysis of the utopian discourse, according to the author of this article, constitutes a third possible way of reading Kopeček’s book, in the intentions of its title, ‘in search of the lost meaning of the revolution’. The book considers the relationship between the movement and its roots, the legitimizing charge of these returns, and hope in the cultivation of an unsatisfying present by reviving its utopian and emancipating dimensions. The author proposes that revision has, from the perspective of this utopian dimension, necessarily accompanied Marxism throughout its existence, and has, with time, even become its driving force.