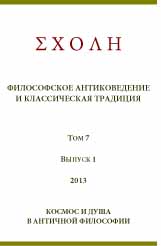 Summary/Abstract: In the seventieth of the last century interest to the pseudo-Pythagorean literature was relatively widespread among philologists. It was fuelled by the fact that these texts, written in the Hellenistic period and falsely ascribed to the Ancient Pythagoreans, were notable for their syncretism both in language and content. They posed difficult questions concerning their provenance and dating and, thanks to the efforts of such eminent scholars as H. Thesleff, W. Burkert, W. Marg, M. Baltes, and T. Szlezák, who had undertaken to place the Pythagorean pseudoepigrapha in the proper Hellenistic and Early Roman philosophical and literary context, for the first time entered the mainstream of contemporary classical studies. Still, despite the research accomplished to date, there remain numerous unsolved questions that continue to puzzle everyone entering on the field of Ancient pseudoepigraphica. A treatise “On the nature of the world and the soul”, ascribed to an ancient Pythagorean Timaios of Locri, is among the most interesting pseudonymous philosophical works available, and it is hoped that the first Russian translation of it will draw attention of Russian-speaking scholars to this intriguing document of Late Hellenistic thought. Information about Timaios’ identity and the nature of the work ascribed to him is given in the introduction to the translation. In the commentary we are trying to note some unclear or otherwise remarkable places, mostly on the basis of a comparison between our treatise and Plato’s dialog as it was understood in the Platonic tradition. Generally speaking this ex facte secondary work has proven to be an important source for our understanding of the development of Pythagorean and Platonic ideas from the Hellenistic period up to Late Antiquity and beyond.