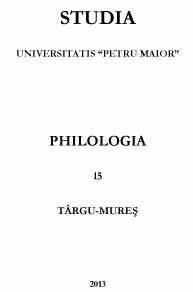 Summary/Abstract: The paper below is meant to investigate the truth behind Philip Roth’s attitude regarding the much debated topic of his “Jewish-Americanness”. There are a number of facts which tie him to this ethnic denomination, also his literary territory is a small Jewish-dominated section of New-York, clearly reflected in his style, however it is shallow and unjustifiable to make constant references to Jewishness in the analysis and interpretation of his literary works.