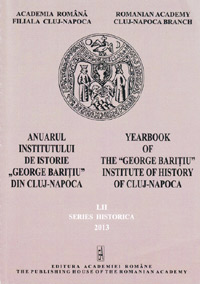 Summary/Abstract: The study looks at the mechanisms through which the political guilt was constructed along the stages of the process of preparing criminal files and convicting people by invoking political crimes at the Cluj Military Court from 1948 to 1956. The article has two parts, the first, dealing with the evolution of the concept of „counter-revolutionary conspiracy” and the criminal legislation connected with it and the second, dealing with the stages of the process through which the involved institutions managed different data obtained during criminal investigations in order to convict persons for political reasons. The main hypothesis is that during the aforementioned stages the political guilt was built mainly through discursive means and that the rhetoric of these institutions aimed to legitimize the repressive measures against those labeled as „counter-revolutionaries”.