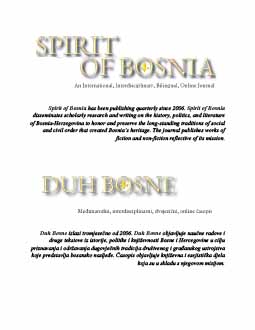 Summary/Abstract: . . . To speak has become increasingly difficult. We have become alienated from the direct quest for the language of the real. The most prominent example of this is in the "politicization" of language, or a tendency towards reification, that is, to turn political speech into a singularly viable means of discourse It would be superfluous to mention that the epoch in which we live — more precisely, the epoch in which we are struggling to live — is an epoch of major impacts, ruptures, and spectacles, all of which call for a new language of the proletariat. Especially in these wretched countries of ours. I used political discourse when I spoke in Sarajevo and about Sarajevo. I come from a country where people tend to keep silent about Sarajevo, and where the political discourse about Sarajevo is just as necessary as the awakening of the selfconsciousness of an entire nation. But the Sarajevo I know, the Sarajevans that I was lucky enough to spend time with, and hence, talk to, cannot be interpreted through political discourse. The Sarajevo that I know was revealed to me through Dr. Kasim Prohić, an outstanding interpreter of Adorno and Lukacs, and the editor of unique philosophical book series called Logos; Dr. Midhat Begić, the first-class essayist whose magazine Izraz became one of the most important centers of our thoughts. Izraz was our retreat place, in the same way as Čedo Kisić's Odjek. And finally, I should pay due respect to Ivan Focht, the aesthetician, and Huso Tahmiščić. The Sarajevo that I know is a living thought in the act of creation, a thought which flees from the politicization of language in the sense that it cannot be reduced to a simple abstraction.