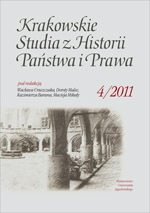 Summary/Abstract: The paper discusses the Hungarian legislation that regulated the ownership referring to real property in the period between the World Wars. The discussion included also the review of the law on colonization and division of the land, as well as the law on bank loans offered to those who were professionally engaged in farming. In addition, the authoress made an analysis of the archaic institution of fideicomissum. While depicting the background of legislative efforts of the time, the authoress recalled the developments that took place prior to the discussed changes in the ownership relationships. Therefore she discussed also the 19th century reforms that abolished serfdom and serf labour, introduced the land and mortgage register etc.