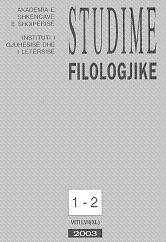 Summary/Abstract: Term as a nominating unit, being widely used in language, enters into relations with other units of language, particulary with common words; consequently, their limits may be confounded. On the other hand, defining a lexical unit as a term depends on the angle from which we view it. Generally, the broad conception of a term brings about the qualification of a term as a unit, being used in different areas of human activities, such as the units nominating the parts of a mill: cekth, trokashkë, dorcë, those used in agricultural area: korrtar, mjeltar, etc. Consequently, the identification of terms among all the other nominating units has a considerable value not only in the teoretical aspect, but also in that practical one. All said above is related to the inclusion of terms in the various dictionaries: philological, terminological, multilingual ones, etc. Here the identification of a term among all the other lexical units, such as common words, professional words and word-groups, etc. is done based on Wüster’s model, treated in his study “Das Worten des Welt”. Based on his conception we can view not only the character of the term system, but also the highest degree of the term abstraction and the connection of a concept with the concept system of a field of knowledge. As a result, a term can be defined as a special nominating unit of lexicon, designating a scientific-technical concept as a element organized in a system of a field of knowledge.