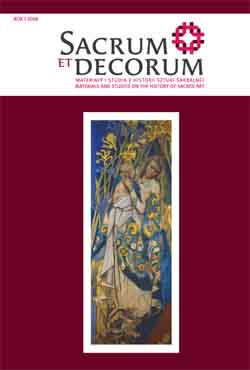 Summary/Abstract: In studies on the art of the past two hundred years there is a widespread view that stained glass windows reappeared in Poland after 1850, i.e. almost a hundred years later than in Western Europe, where interest in coloured glazing had been growing since mid-eighteenth century. The paper challenges that opinion and is aimed at preliminary understanding of the issues concerning stained glass of the first half of the nineteenth century in the Polish territories. A direct impact on the growth of interest in stained glass in Poland in the early decades of the nineteenth century was exerted by a fashion for the Middle Ages, originating in England and widespread especially in the circles of the aristocracy. It is in this context that one should locate the extraordinary collection of ancient stained glass windows gathered in Puławy by Izabela Czartoryska of the Fleming family, and the coloured glass of the first neo-Gothic interiors, e.g. in the chapel in the palace of the Bishops of Kraków, decorated at the time of Bishop Woronicz, the Gothic House in Puławy, the palace of Ludwik Pac in Dowspuda and the chapel of Anna Dunin-Wąsowiczowa in Kraków’s cathedral, with a stained glass window imported from the studio of Bertini and Brenta in Milan. Presentation of the beginnings of the stained glass revival in Poland is completed by stained glass technologies other than the classic ones and by colourful window glazing which was sometimes made instead of the figurative stained glass.